I try to stay away from overtly partisan political blogging. One more article on why we should loathe or love Donald Trump? Please. Still, it’s hard to resist the odd political observation. There was abundant commentary in late January on the first anniversary of the Trump presidency. The President’s supporters celebrated his accomplishments, such as they are. His opponents denounced them. Among opponents, some, more interestingly, asked in pained tones how or why this  - to his opponents – awful event, the Trump Presidency, ever came to be.

From the left comes T.J. Stiles with “How Do We Explain this National Tragedy? This Trump?”  You hardly need to go further than the subtitle for the answer proffered here: “400 Years of Tribalism, Genocide, Expulsion, and Imprisonment,” or, even more concisely, white ethnocentrism.  It does not seem to strike T.J. Stiles that ethnocentrism, important as it may be, is by itself too general a model to explain the behavior of a country that elected both Barack Obama and Donald Trump.

And, though this is a much bigger question, for another time, one has to ask: ethnocentric how specifically, compared to what?  Azar Gat’s book ‘Nations: The Long 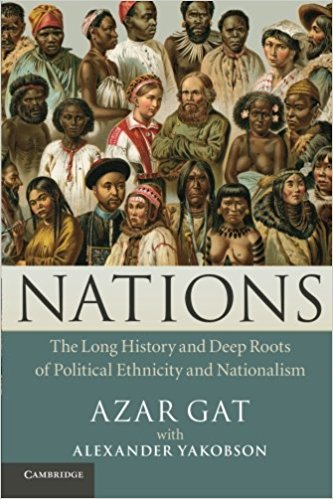 History and Deep Roots of Political Ethnicity and Nationalism’ is convincing that ethnicity – understood broadly as ‘shared kinship (real or perceived) and culture’ – has been the main glue of political community throughout history. So, merely to call a country ethnocentric is to have said not very much at all. Is the U.S. ethnocentric compared to the clan and tribally structured societies of Africa and the Middle East? Caste-based India? The racially layered conquistador oligarchies of Latin America? The ethnically homogenous, racially exclusivist societies of East Asia?

Based in part on the personal experience of having lived all over the place, I assert that the United States and Western countries have evolved the most open and inclusive form of ethnocentrism and political community in the world today. It is hardly surprising that many of the existing American citizenry might be alarmed by and want to moderate the rapid pace of immigration from very different cultures experienced over recent decades. You would expect that anywhere. And it is hardly surprising that a substantial fraction of the population would, their not unreasonable views on immigration having been shut out by the pro-globalist elites in both the Republican and Democratic parties for decades, look ultimately to an outsider like Trump.

What is more surprising is the gradual, admirably law-abiding and moderate manner in which this demand has finally made its way onto the stage, compared to the ethnic mayhem that might have long since occurred in many another country. Take a look at the recent immigration reform proposal from the Trump administration, which is a centrist compromise. The immigration extremists on both the right and the left hate it, while the public – both as a whole and across all major ethnic groups - supports this sort of compromise by a wide margin.

A more focused take on “Why Trump?” comes from Timothy Carney, a conservative ‘Never Trumper’: “One Year In – How Obama Gave Us Trump.”  Carney says there are many answers to the question ‘Whose Fault is Trump?’ but that, if you want to blame one person, it’s probably best to start with the most powerful man in the world on Election Day 2016.

Obama gave us Trump, says Carney, first, by “giving the country the least likable Democratic nominee in modern history.” Obama set Hilary Clinton up in various ways while sidelining Joe Biden, who could have won. Carney does not ask why Obama backed Clinton. Perhaps Clinton was simply the politically closest to Obama. Unlike Bernie Sanders, she was in with the globalist Big Business wing of the Democratic Party.  Unlike Biden, she was comfortable with the identity politics that had captured the party’s base.

Second, says Carney, Obama inadvertently ‘normalized’ Trump by lumping him in with all the other Republican candidates. The intention was to make the others look abnormal but ended by making Trump looking normal.

“Third, and most importantly, Obama’s administration helped Trump beat Hillary, because it scared conservatives into voting for Trump.”

Carney, a practicing Catholic, emphasizes aggressive government legal actions to push back religious institutions and individuals on issues like contraception, abortion, and gay marriage. “Obama, by weaponizing the federal government against religious institutions and individuals, escalated the culture war to the point that many conservatives realized no peace was possible. They were willing to vote for a man like Trump if that’s what it took to keep HHS and the DOJ from shutting down their schools and businesses,” he says.

The point is convincing and has wider application. The rise of aggressive identity politics in the Democratic party and its affiliates in Obama’s second term was frightening not only to conservatives but also to many traditional liberals and even some minorities.’White Male’ became a socially acceptable form of racist and sexist abuse at this time. People looked at the Democrats’ embrace of Black Lives Matter, on the one hand, and a scary upturn in rioting and violent crime in many big cities on the other, which handed the powerful ‘law and order card’ to Trump. There was the disturbing attack by ‘social justice warriors’ on free speech and due process in the colleges, with, it appeared, the implicit blessing of the educational bureaucracy. Now, if you were not in line with the ruling ‘politically correct’ ideology, you were scared to open your mouth, scared to lose your job.

Do not think that it was only the much-maligned “white males” and their wives who were scared into voting for Trump. According to exit polls, around 30% of Hispanics and Asians voted for Trump, one of the most important and disregarded facts of the last election. There were doubtless many reasons for this. But among them, surely,  was, that some of these people came here to escape countries that had been destroyed by aggressive identity politics and social disorder, countries without free speech and due process.  They were tired of looking over their shoulders. They were scared their beautiful new home would turn into the old.